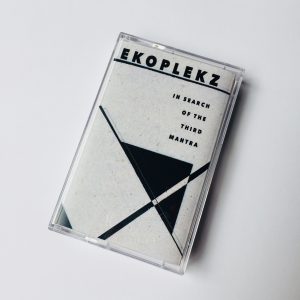 We are ending the year in the best possible way – by releasing an album by one of our favourite artists, and someone we’ve been trying to work with since he appeared on the Outer Church compilation over five years ago.

TAPE IS SOLD OUT BUY GRAB THE DIGITAL HERE

Drawing parallels between present day Britain and that of the turn of the 80s, Ekoplekz looks back to that era’s industrial and post-punk soundtrack for inspiration.

In a land increasingly brutalized by austerity and divided by nationalism, the tensions that informed some of the post-punk era’s most important works (Red Mecca, Unknown Pleasures, Metal Box) haunt this collection of bleak postcards from the present.

The album is dedicated to the late Mark Fisher, who’s brilliantly insightful writing is sorely missed while trying to make sense of these insane times.